I am thrilled to be sharing this post with you!  This project was on my list of things to do this summer, but I never got around to completing it.  Recently, I stumbled across this post from Centsational Girl about painting furniture.  She had some great tips, some of which I used on this project.
So here's the story:  My son has a dresser in his room that my husband and I purchased right out of college after we had gotten married.  Money was tight so we decided on purchasing some unfinished furniture.  I painted the dresser green and purple to match our (then) comforter.  Not sure what I was thinking, but obviously I thought it was "the bomb."  Once we were done with it and my son inherited it, I painted an orange color right over the green and purple (without any sanding and priming.)  I had also dry brushed an off-white on top of the orange.  Over the years the paint has chipped, especially on the top of the dresser.  It had become an eye sore and something needed to be done.
I came across this picture while poking around the internet and instantly became inspired.
So, here is what I started with: 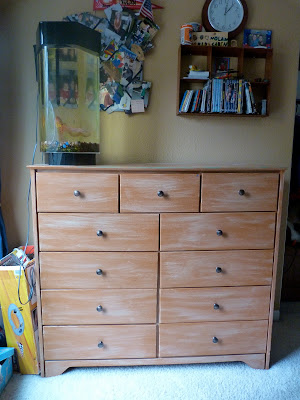 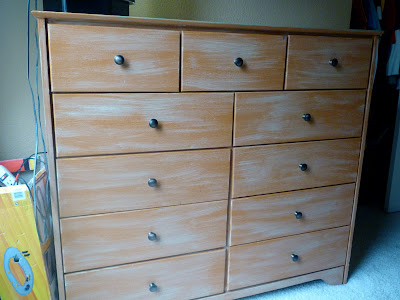 This is where it gets bad.  The top of the dresser had chipped paint and "guck" that was left after my son tried growing crystals with a kit. 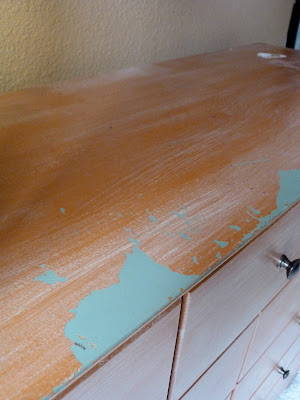 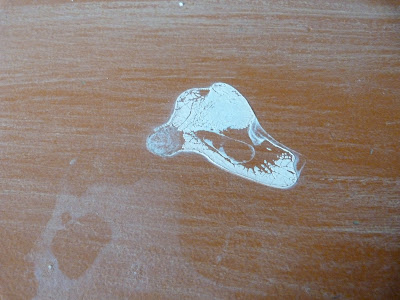 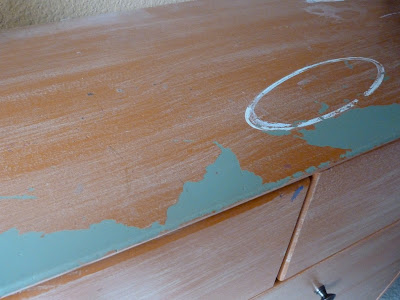 The gradient paint job was a great idea until I realized that the dresser had 5 sets of drawers instead of four like in the picture.  The problem was that all of the paint chips had 4 colors on the cards and I needed six (5 colors for the drawers and 1 color for the dresser.)  Sure, I could've extended the colors onto the next paint chip, but the colors either got too light, or I didn't like them.  Here is the paint chip from Behr I decided on: 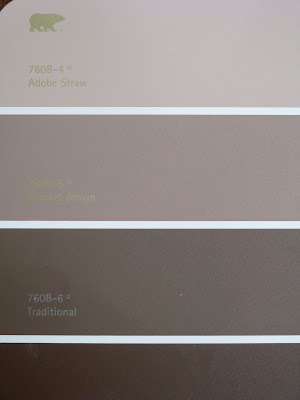 After looking at a lot of colors and trying to figure how I was going to make this work, I decided that I would paint the frame of the dresser the darkest brown.  I would also paint the top set and the bottom set of drawers the darkest brown.  The middle drawers would be painted the 3 other colors.
To save money, I purchased the sample size containers of paint for the middle drawers.  I used Martha Stewart and Glidden because they offer a satin finish and the Behr samples only come in flat.  The woman at Home Depot color matched the paint for us since we had decided on Behr colors...and I think I ended up with one Glidden because she ran out of Martha paint. 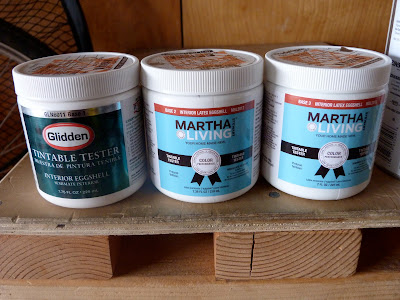 Then, because we chose Martha for the drawers, we went with Martha for the dark brown color so that everything would have the same sheen.  Underneath the Martha paint is the primer that Centsational Girl suggested.  It is an oil based primer so I used one of the (pink) rollers for smooth surfaces and just trashed it when I was done.  I wasn't about to try to clean it. 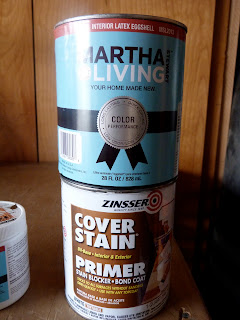 Here are some of the materials I purchased for the project. 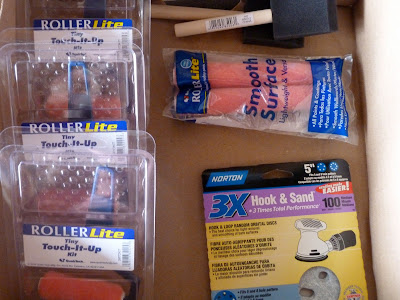 The first thing I did was use a sander to rough up the drawer fronts (even though the primer says said it wasn't necessary) and the dresser top.  I did a more serious sanding job on the top of the dresser compared to the drawers.  I used a roller to paint the entire dresser. 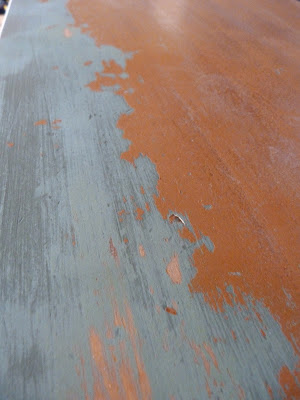 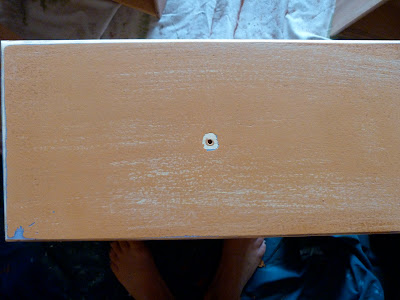 We had this primer tinted one of the lighter browns on the paint chip.  It was easier to cover the tinted color versus the bright white of the original primer color. 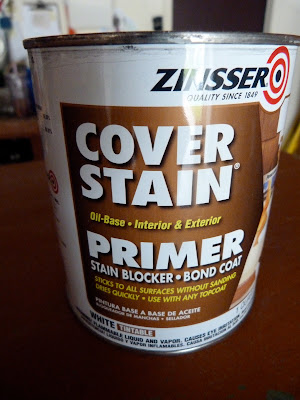 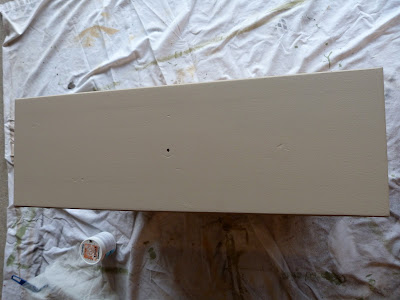 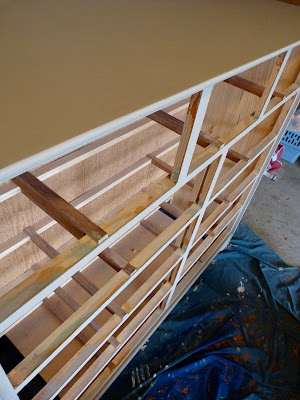 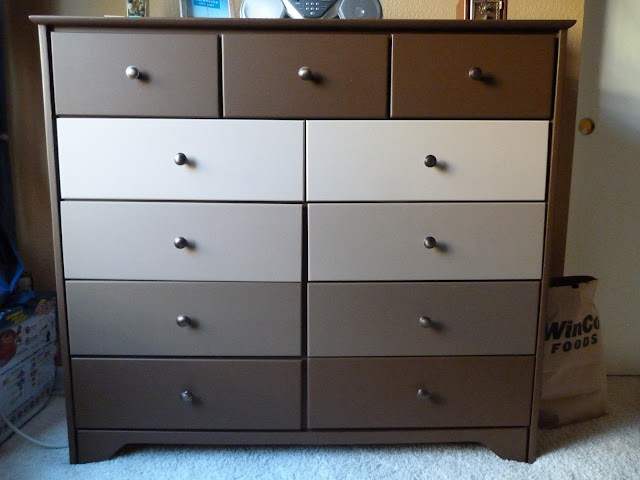 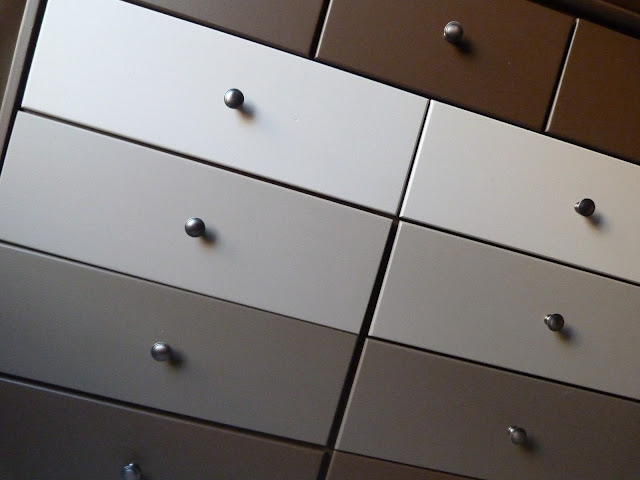 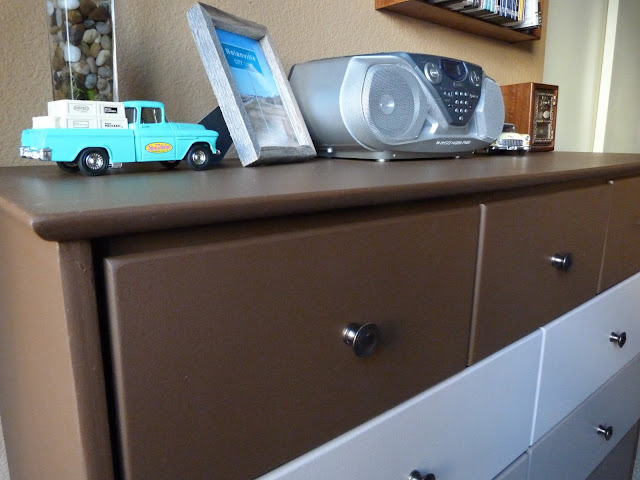 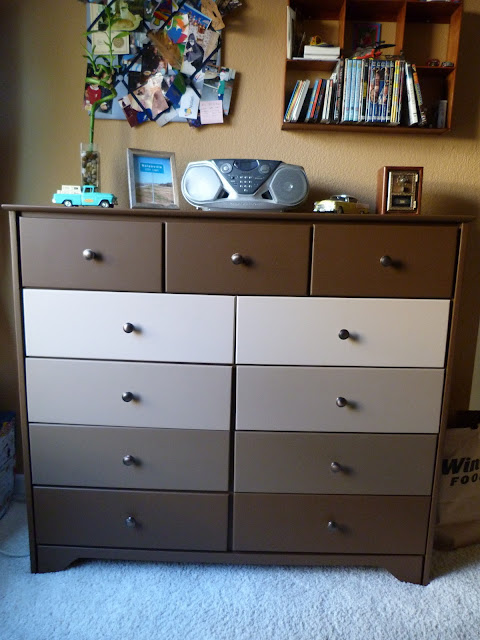 This project was completed in one afternoon and for only $45.00!!
Posted by Emily Wilson at 8:14 PM